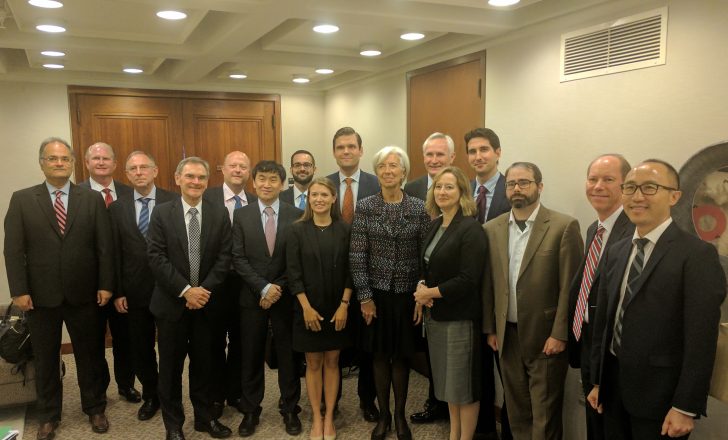 The International Monetary Fund (IMF) concluded the first-ever meeting of its High Level Advisory Group on FinTech today, a group that features a significant contingent of senior-level blockchain executives.

In total, 14 participants attended a panel leading up to a closed-door session with IMF managing director Christine Lagarde, seven of whom represented companies in the blockchain industry.

While the meeting itself wasn’t public, the panel was both streamed by the IMF and live-tweeted, marking what panelist Alex Tapscott, author of “Blockchain Revolution”, described to CoinDesk as a shift in the way global policy should be determined going forward.

“There’s a convening power that the IMF has, and I think they should bring together central bank governors. But also, the process should be transparent and it should be inclusive and that people from outside of central banking should be able to provide their input on what needs to be done.”

Tapscott described the overall attitude of the meeting as “very positive”, estimating 80% of the conversation focused on blockchain, while 15% centered on machine learning and 5% covered other technologies.

Collectively, the group has been tasked to work with the IMF’s Interdepartmental Working Group on Finance and Technology, established in 2016 to study the economic and regulatory implications of blockchain and other developments in financial technology.

“This is not a blockchain group, per se,” said Tapscott. “It is a fintech group, and yet a majority of people who are on this board are actually from the world of blockchain.”

Following a series of meetings throughout the day, Chain’s Jill Carlson described the conversation as more of a dialogue than a question-and-answer session.

She added in general terms that the meeting attendees looked at regulatory structures they might want to explore with the IMF, central banks and international financial institutions.

In addition to discussing the benefits of the technology should the IMF and others decide to embrace blockchain, Carlson said they also weighed the risks its wider use could bring.

Though Carson refrained from going into too many details about the specific items discussed, she said “there’s not much happening behind the scenes to see”.

“It’s looking to be transparent and really act in the spirit of the technology, which is democratizing financial services.”

IMF and the blockchain

Yet, the meeting is notable as the IMF’s willingness to explore the largely experimental technology comes amid a turbulent time for the global economy.

Yesterday, the IMF released its World Economic Outlook, in which it forecast a global economy that is “gaining momentum – for now”, but also expressed concern over the potential negative implications of increasingly nationalistic behaviors.

It is against that backdrop that the IMF has taken an increasingly public stance regarding blockchain.

Last January, the IMF published a paper supporting pro-cryptocurrency regulation, and earlier this year, it co-hosted a blockchain seminar with Dubai’s Ministry of Finance focused on blockchain and digital currencies.

Piece or the pie?

Still, according to Tapscott, the lion’s share of blockchain companies on the IMF’s financial technology advisory group is evidence of a shift in the perception of blockchain.

Whereas blockchain was previously viewed as a subset of fintech, Tapscott argues that innovators from industries including artificial intelligence, virtual reality, social media and cloud now see blockchain as the “transaction infrastructure” that could tie all this tech together.

“It’s this much larger technology that, in addition to being the basis for a lot of the innovation that I think will happen in financial services, is also something that could change basically every industry in the world.”