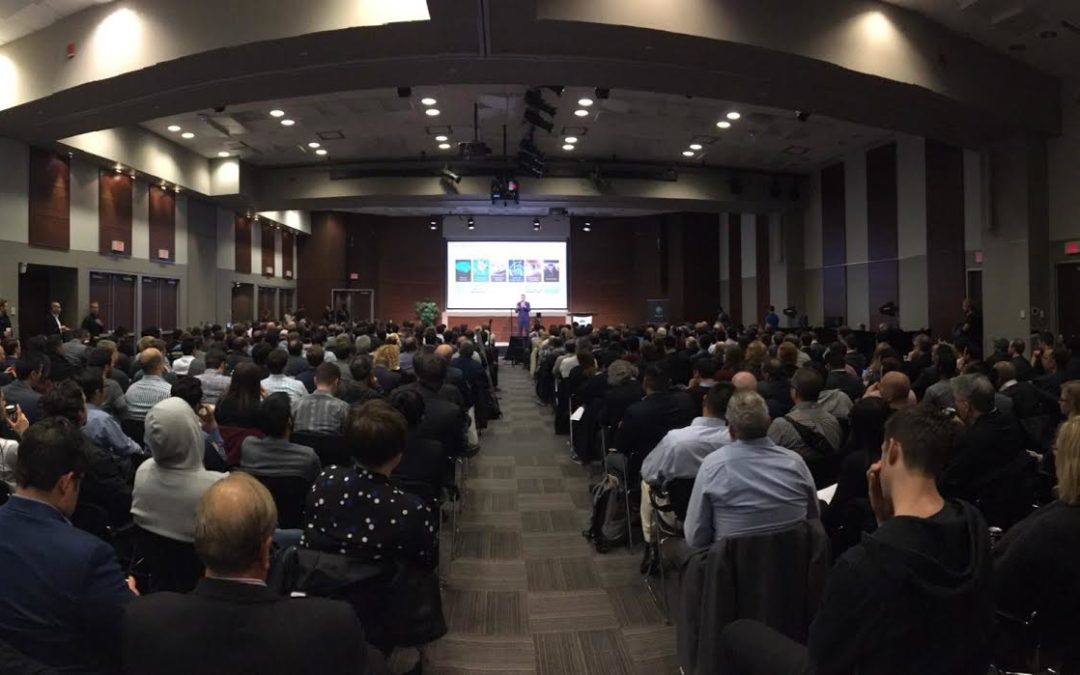 On Monday May 8 2017 Fintech Canada hosted the biggest blockchain event in Canadian history at the MaRS Discovery District.  Over 1200 people attended with many being turned away at the door because of capacity restrictions at the venue.

Our very own Alex Tapscott gave the keynote speech of the evening. followed by some of the most exciting and thought provoking leaders in the space.

Matthew Roszak; Blockchain: The New Operating System for Business & Beyond; co-founder and chairman of Bloq, a blockchain enterprise software company. He is also founding partner of Tally Capital, a private investment firm focused on blockchain-enabled technology with a portfolio of over 20 investments, including BitFury, Blockstream and Factom. He is a blockchain investor, entrepreneur and advocate. He has spent over 20 years in private equity and venture capital with Advent International, Keystone Capital Partners, Platinum Venture Partners and SilkRoad Equity, and has invested over $1 billion of capital (from start-up to IPO) in a broad range of industries. Mr. Roszak is a director and beneficial owner of Eboost, MissionMode, Neu Entity, Onramp, SolidSpace and TrueLook. Mr. Roszak serves as chairman of the Chamber of Digital Commerce, the world’s largest trade association representing the blockchain industry. In addition, Mr. Roszak serves on the board of BitGive, a non-profit foundation targeting public health and the environment. Mr. Roszak is also the founder of the Chicago Bitcoin Center, and was a producer of the documentary, The Rise and Rise of Bitcoin. Mr. Roszak is a sought after thought leader on blockchain technology, and has testified as an expert before US Congress and spoken at The Brookings Institution. Mr. Roszak has been featured on CNBC and quoted in The Wall Street Journal, Bloomberg and Financial Times. In addition, Mr. Roszak has presented at FinTech conferences worldwide, including Money20/20, CES and American Banker.

James Gonzalez – Unsung; Executive Director of Unsung Canada, CEO of Crypto Consultant & on the board of directors of Blockchain Association of Canada. He has been working as a private equity investor and consultant for over 17 years. Since late 2012, James has been involved in the Blockchain industry gaining entry through Bitcoin, which further spread to countless other crypto currencies, consulting and venture capital endeavours. In late 2016, James teamed up with Jason King and Dean Masley of Unsung.org to create the same distributed network for people to help people called Unsung Canada. Unsung harnesses the power of a mobile application to connect the abundance of food, clothes, and essential items to the people who need it the most, delivered through a distributed network of volunteers. He will speak about the history of Unsung.org, explain how the mobile app works and how they are using distributed networks to empower people to be the change in their communities.

Francis Pouliot – Bitcoin Embassy, Satoshi Portal & Bylls; Fransic is the director of public affairs at the Bitcoin Embassy in Montreal and is also the CEO of Satoshi Portal. The Portal develops, implements and operates Bitcoin services software and applications which aim at increasing the accessibility and adoption of cryptocurrency at the retail, end-user level. The Bitcoin Embassy’s mission is to drive the adoption of Bitcoin and other cryptocurrencies and to provide resources for individuals and groups whose projects revolve around decentralized / open technologies that will promote privacy, liberty and decentralization on the internet.

Charlie Shrem – Intellisys Capital; Charlie is founder of the Bitcoin Foundation and worked on the standardization, protection and promotion of Bitcoin. As co-­‐founder and former CEO at BitInstant LLC, an early Bitcoin start-­‐up that provided a secure, fast and convenient way of globally buying and selling Bitcoin, Charlie led the company during its infancy to innovate and provide services aligned with the needs of the fast-­‐growing Bitcoin community.

Andrew Flip. Filipowski – Compound Cataclysmic Disruptors; CEO, COO of Cullinet, the largest software company of the 80’s and founder & CEO of Platinum technology, inc., 8th largest global software company at time of sale to CA for 4 billion dollars. ‘Flip’ is a successful high-tech entrepreneur, philanthropist, and industry visionary. He is Chairman and CEO of SilkRoad Equity, the premier investment and venture firm supporting companies and technologies related to the Bitcoin ecosystem.

Bill Barhydt – Abra; The Abra smartphone app is a non-custodial Bitcoin wallet that allows you to see the value of your funds in any world currency you choose. Abra is backed by Amex and Tata. Goal at Abra is to be the WhatsApp of Money. A single app in 200 countries that enables a consumer to send money from any phone number to any other phone number, anywhere, in the world. To do this Abra has built the first global, peer-to-peer, digital cash, money transfer App. Abra uses Blockchain technology for secure money transfers and payments while protecting the value of deposits in local currency.

Sathvik Vishwanath – Unocoin, CEO; India’s leading bitcoin blockchain company. Started in 2013, Unocoin is a Bangalore based technology startup and is India’s first entrant into the bitcoin industry. The company operates India’s largest BTC-INR trading platform which enables users to buy, sell, store, use and accept bitcoin. In just 3 years since inception, the company has drawn more than 30 top investors including Digital Currency Group, Boost VC, Funders Club, Bank to the Future, Blume Ventures along with many others.